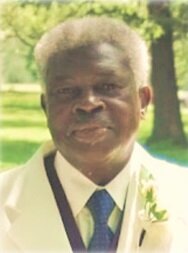 On February 20, 2022, the Lord called Eugene Clark Sr. home and reunited him with the love of his life, his late wife Ruby.  Eugene was born March 5, 1940, to the late May and Timpie Clark in Lauderdale, MS.  Eugene came to Michigan in 1968 to work at Sanitary Mattress Company and later Steering Gear, where he retired from in 1982.  Eugene met Ruby in April of 1968 and they married October 7, 1968.  Eugene was a good man with a giving heart, and he will be missed by all who knew him.

The family would like to thank the staff at Cass River Health Plaza, especially Lori Jones, Pattie, and Alice.  Also, thanks to the staff at Promedica (Heartland) Hospice Home Healthcare, especially Randall, Skylar, and Heather.  We appreciate all of you and thanks for caring.

The Clark family will hold a private ceremony on Wednesday, February 23, 2022 to celebrate Eugene’s life. Pastor Terry Randolph will officiate. Following the service, Eugene will be entombed at the Roselawn Memorial Gardens Mausoleum.

Deisler Funeral Home is honored to be serving the Clark family. Please share your thoughts and memories with the family through www.deislerfuneralhome.com or by mailing condolences to c/o the Clark family, 2233 Hemmeter Road, Saginaw, MI 48603.

To send flowers to the family or plant a tree in memory of Eugene Clark Sr. , please visit Tribute Store

A Memorial Tree was planted for Eugene
We are deeply sorry for your loss ~ the staff at Deisler Funeral Home
Join in honoring their life - plant a memorial tree
Services for Eugene Clark Sr.
There are no events scheduled. You can still show your support by sending flowers directly to the family, or planting a memorial tree in memory of Eugene Clark Sr. .
Visit the Tribute Store
Share Your Memory of
Eugene
Upload Your Memory View All Memories
Be the first to upload a memory!
Share A Memory
Send Flowers
Plant a Tree