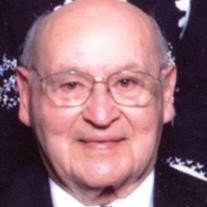 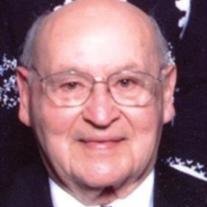 REINERT, Albert Curry of Saginaw Township passed away on Thursday, January 27, 2011 at Covenant HealthCare - Cooper, at the age of 95 years. He was born in Traverse City, Michigan on January 5, 1916, son of the late Walter and Mena (Curry) Reinert. Al Graduated from Saginaw High School in 1933, he later worked for several years at the Chevrolet Grey Iron Foundry. In 1937, he started his college studies at Bay City Junior College, where he met his future wife, Marilyn Charters. Al and Marilyn were married at St. James Catholic Church in Bay City on September 13, 1941. When Marilyn passed away on January 14, 2006, they had been married for 64 years. His studies were interrupted with World War II when he joined the U.S. Army in 1943. Traveling overseas he served as a C.I.D. Agent (Criminal Investigation Division) with the 6709 C.I.D. Platoon in North Africa, Italy and Greece. After returning home in 1946 He continued his studies at the University of Detroit Law School, graduating in 1948 with his Juris Doctorate. While in law school he worked as an insurance investigator and Marilyn worked as a private secretary. Albert practiced law in Saginaw for 58 years. In his early years of practice he was associated at various times with Irving M. Hart, W. Carl Bauer and Bruce Mellinger. For the past many years, he and his son Michael Reinert and grandson Joshua Reinert practiced as a three generation law firm. He was a member of the Saginaw County Bar Association, State Bar of Michigan, and the American Bar Association. For many years he served on the board of Catholic Family Service. He was elected President of the Saginaw County Bar Association in 1971 and was a former President of the United Service Clubs. Al and his family spent many years at their condominium on Higgins Lake. He loved to fly fish on the Au Sable River and other beautiful trout streams up north. A highlight in his fly fishing experience was a great fishing trip to Montana with his son Mike and grandson Josh. Al is survived by his son, Michael C. (Barbara) Reinert three daughters, Kathleen (Kelly) Wolgast, and Nancy (James) Silk, all of Saginaw and Christine (Hugh) Reed of Horse Shoe Bay, TX. Also surviving are six grandchildren; Hillary (Brett) Henderson of East Lansing: Joshua M. (Erin) Reinert of Saginaw, Eric Silk of Plantation, FL, Andrew Silk, Michael Wolgast both of Saginaw and Gretchen (Shane) Spradling of Washington D.C, and four great grandchildren. He was preceded in death by a much, loved grandson, Matthew J. Wolgast, and a very dear step mother Ann Reinert, and a brother Thomas M. Reinert. FUNERAL- Funeral Liturgy will take place at 11:00 a.m. on Saturday, January 29. 2011 at St. Stephen Catholic Church, 1310 Malzahn, Rev. James G. Heller will officiate. Private Rite of Committal will follow at St. Andrew Mausoleum. Military Honors conducted under the auspices American Legion Post #439. VISITATION- There will be no visitation at the funeral home. Friends are welcome to visit with his family at St. Stephen Catholic Church on Saturday from 10:00 a.m. until the time of the Mass. MEMORIALS- In lieu of flowers those planning an expression of sympathy may wish to consider memorials to Matthew J. Wolgast Children's Library at the Thomas Township Library or The Cartwright Hospice Residence. Please feel free to share your thoughts with his family at the church or through www.deislerfuneralhome.com.
To send flowers to the family or plant a tree in memory of Albert Reinert, please visit Tribute Store
Services for Albert Reinert
There are no events scheduled. You can still show your support by sending flowers directly to the family, or planting a memorial tree in memory of Albert Reinert.
Visit the Tribute Store
Share Your Memory of
Albert
Upload Your Memory View All Memories
Be the first to upload a memory!
Share A Memory
Send Flowers