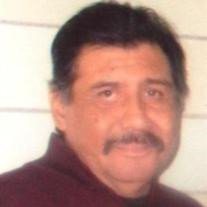 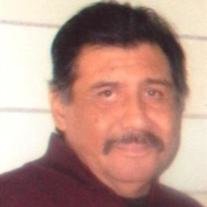 Please share a memory of Eduardo to include in a keepsake book for family and friends.
View Tribute Book
SERRATO, Eduardo D. "Eddie" of Saginaw, Michigan passed away on Thursday, February 24, 2011 at Henry Ford Hospital. Age 65 years. Eduardo Serrato was born on December 5, 1945 in Encinal, Texas to the late Emilio and Celedonia (Delgado) Serrato. He was married to Mary L. Martinez on January 12, 1963 in Saginaw. She survives him. Eddie appeared on American Bandstand in the 1960's. He was the original drummer for ? & Mysterians which produced the number one hit 96 Tears and enabled Eddie to be inducted into the Rock and Roll Hall of Fame. He was a musical engineer at Joey Records in San Antonio, Texas. Eddie played with and produced several well-known Tejano musicians. Surviving besides his wife, Mary are three sons and two daughters: Eduardo (Yvette) Serrato, Javier (Mary Helen) Serrato, Marc (Dalia) Serrato, Sonia (Eugene) Herrera, Serena (Roberto) Garcia; 16 grandchildren; four great-grandchildren; two brothers and one sister: Emilio and Rudy Serrato and Jacqueline Herrera. Eddie was predeceased by a brother, Rolando Serrato. FUNERAL - Eduardo's Funeral Liturgy will take place at 10:00 a.m. on Monday, February 28, 2011 at St. Joseph Catholic Church, 936 N. Sixth Ave. Fr. Thomas Schmied, Capuchin, will officiate with burial in Mt. Olivet Cemetery. VISITATION - Friends may call at the Deisler Funeral Home, 2233 Hemmeter (off State) on Sunday, February 27, 2011 from 3:00 p.m. to 9:00 p.m. A Vigil service will take place on Sunday at 8:00 p.m. Eduardo will lie in state at the church on Monday from 9:00 a.m. until the time of Mass. MEMORIALS - In lieu of flowers, those planning an expression of sympathy may wish to consider a memorial to The Serrato Family Discretionary Fund. Please share your thoughts and memories at the funeral home or through www.DeislerFuneralHome.com.
To send flowers to the family or plant a tree in memory of Eduardo Serrato, please visit Tribute Store

Look inside to read what others have shared
Family and friends are coming together online to create a special keepsake. Every memory left on the online obituary will be automatically included in this book.
View Tribute Book
Services for Eduardo Serrato
There are no events scheduled. You can still show your support by sending flowers directly to the family, or planting a memorial tree in memory of Eduardo Serrato.
Visit the Tribute Store
Share Your Memory of
Eduardo
Upload Your Memory View All Memories
Be the first to upload a memory!
Share A Memory
Send Flowers
Plant a Tree