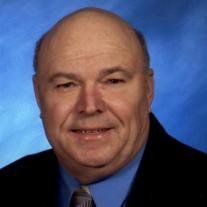 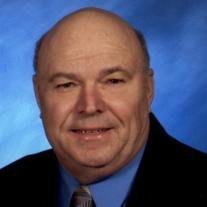 Please share a memory of Thomas to include in a keepsake book for family and friends.
View Tribute Book
KNIEPER, Thomas J. "Dziadziu" of Prudenville, MI formerly of New Lothrop, MI Was welcomed into the loving arms of his Savior Wednesday, August 24, 2011 at Covenant Cooper surrounded by his loving family. Age 69 years. Thomas Joseph Knieper was born February 11, 1942 in Detroit to Albert & Imelda (Yaklin) Knieper. He married Therese A. Suchyta on June 26, 1971 at St. Hedwig Catholic Church in Bay City. She survives him. Tom was self-employed as a hardwood floor sander, owning and operating Knieper Wood Floors, Inc. for 29 years. He retired with his wife to the Houghton Lake area. Tom was an active member at Our Lady of the Lakes Catholic Church, where he was President of The Men's Club, and former member of St. Michael of Maple Grove. He was also a member of the K of C Councils #6584 serving as Warden and #2943 serving as Treasurer. He volunteered at St. Vincent DePaul Society in Prudenville. In addition to his many charitable acts, he also loved organizing bus trips to casinos. Tom loved polka music, hosting many dances. He was an avid softball player and golfer. He enjoyed giving back to the community and spending time with the youth, especially his grandchildren. In addition to his wife of 40 years, Therese; Tom is survived by his three children: Becky (Bob) Naessens, Mike Knieper and Scott Knieper; four grandchildren: Kasia, Jackson, Remington and Cameron; his mother, Imelda Knieper; eight brothers: Jerome (Pat), Ed (Dee), Brother Luke, C.SS.P., Andy (Paulie), Rich (Jackie), Ken (Nancy), Dave (Joyce) and John (Carolyn); six sisters: Marge (Jerry) Dugal, Barb (John) Bruckman, Marie (Jerry) Zervan, Dorothy (Larry) Wendling, Elizabeth (Mike) Hechinger, and Linda (Lynn) Miller; many in-laws, nieces, nephews and friends. He was preceded in death by his father, Albert; infant brother, Phillip; one sister and her husband, Aileen (Phil) Conley; one brother and his wife, Robert (Doreen) Knieper; in-laws, Frank & Irene Suchyta; brother-in-law, Dennis Suchyta; sister-in-law, Kelly Jo Suchyta. FUNERAL: Mass of Christian Burial will take place 11:00 a.m. on Monday, August 29, 2011 at St. Michael Catholic Church of Maple Grove, 17994 Lincoln Road, New Lothrop. Rev. Fr. Randy Kelly and Rev. Fr. Bob Malloy O.F.M., Cap will concelebrate with burial in St. Michael Catholic Cemetery. VISITATION: Friends may call at the Deisler Funeral Home, 2233 Hemmeter, Saginaw, MI. Sunday, August 28, 2011 from 2:00 to 9:00 p.m. Tom will lie in state at the church Monday from 10:00 a.m. until the time Mass. Knights of Columbus will pray the Rosary Sunday at 7:00 p.m. at the funeral home. DONATION: In lieu of flowers, memorial contributions may be considered to Capuchin Soup Kitchen or St. Vincent DePaul Society of Prudenville.
To send flowers to the family or plant a tree in memory of Thomas Knieper, please visit Tribute Store

Look inside to read what others have shared
Family and friends are coming together online to create a special keepsake. Every memory left on the online obituary will be automatically included in this book.
View Tribute Book
Services for Thomas Knieper
There are no events scheduled. You can still show your support by sending flowers directly to the family, or planting a memorial tree in memory of Thomas Knieper.
Visit the Tribute Store
Share Your Memory of
Thomas
Upload Your Memory View All Memories
Be the first to upload a memory!
Share A Memory
Send Flowers
Plant a Tree